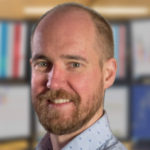 Price Ladder Trading: When To Get Out of a Trade

Often the easy part of trading is knowing where to stop out of a trade – the point where a trade is no longer valid. This is often quickly discernible from a chart: if a certain level is broken then your stop out is the simplest form of stop. However, what do you do when you are on side? Your exit is how you maximise your earning potential.

Using order flow to perfect your exit is particularly useful on a news driven move where a clear target is difficult to decide upon – if you use a chart derived target you run the risk of exiting too early or not getting filled at. In the case of or the S&P 500 futures move over CPI a chart generated target would likely have reduced your profit potential due to the outsized move, whereas using order flow and the price ladder, a clear signal came that profit can be taken.

That signal came in the form of an exhaustion move whereby as a level broke the S&P had a final flush lower which was much faster and violent than the preceding fall showing an exhaustion of selling and final longs stopping out. The change in order flow characteristic is analysed in a live Axia daily debrief which shows how the final flush gives the ideal profit maximising exit.

Alternative trend exhaustion and reversal strategies based on order flow are considered in depth in Module 11 of the Axia Futures ​Price Ladder course where multiple drills give you opportunity to trade them and perfect these skills.

If you are looking to develop a career as a trader within a professional and successful environment, then the Axia Futures 8-week Intensive Trader ​Training is the most comprehensive in the industry based​ ​upon​ ​skill​ ​development​ ​within​ ​the​ ​proprietary​ ​futures​ ​trading​ ​environment.